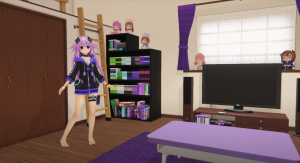 Have you ever wanted to live in an anime world with your favorite characters and waifus?

Chin up, buddy. You can!

With a virtual reality console, you can experience anime games in thrilling and novel ways. You’ll be able to tread and interact with an anime-inspired world freely in 3D—something no anime show or PC game can do.

While most VR anime games bring something (or someone) great for the right person, this list will cover the titles that tower high above the rest.

Let’s look at the best anime VR titles for anime fans of all kinds!

Have you ever wanted to play as an anime protagonist, hacking and slashing your way against powerful monsters and foes?

Sword Reverie might be right up your alley. Besides combat, you can also explore the vast fantasy environment and unlock new weapons and abilities as you progress.

Sword Reverie is a JRPG-inspired VR action game that’s playable on the Oculus Rift S or through Steam VR.

The game’s made by a small team called Isekai Entertainment that’s dedicated to bringing one of the first authentic anime titles in the virtual reality space. The game is still in Early Access mode, but the developers plan to have 5 maps with unique boss encounters by the game’s final release, all with voice acting and a fully fleshed-out plot.

Beat Saber is a rhythm game set in a futuristic world, and one of the most beloved titles in the virtual reality world. To highlight the true acclaim of this title, Beat Sabers won The Steam Awards 2019 VR Game of the Year Award.

Using your controllers, you slash the platforms (or “beats”) as they come hurtling towards you. Each beat comes with its own visual cue to help you slice through the beats at the right directional angle. The pulsing music beats also are adrenaline-pumping and work in sync with the beats you see on-screen.

Easy to learn and hard to master, Beat Saber is a game that’s charming for the casual and competitive crowd alike. You can even compete in multiplayer and challenge your friends or complete strangers from anywhere around the world.

If you’re familiar with the anime, you’ll be pleased to hear Lawrence and Holo returning in this VR game.

The setting is an idyllic remote bathhouse in the middle of the woods. During this time, they’ve also been blessed with a daughter in this peaceful life.

The game comes with a story mode and a game mode where you can enjoy watching the anime together with Lawrence and Holo. You’ll also get to watch it in the style of Japanese paper street theater.

One of the few popular anime shows that turned into a VR experience, Spice & Wolf VR 2 brings a wonderful (albeit short) slice-of-life experience that’s worth trying out.

Available in PSVR and SteamVR, Tokyo Chronos is a game where you, acting as the protagonist, are mysteriously left in a desolate Shibuya with 8 other people. Who are they? What happened to the world?

Many questions may arise at the beginning of this game. But through adventuring and puzzle-solving, you begin to unravel the mystery cast in this silent Shibuya.

The unique quirk about this game is that it features multiple endings, depending on the choices you’ve picked throughout the game. With over 15 hours of gameplay, you’ll have many chances to change the course of this story-driven game in polarizing ways.

Are you a fan of the virtual singer Hatsune Miku? You’ll be glad to know that you can play a rhythm game dedicated to her catchy tunes in virtual reality!

Playing the game is simple. Catch the melody symbols as they fly across the screen as Hatsune Miku’s songs play. Sounds easy, right? Well, buckle up, cause you can amp the game even more.

If you want a challenge, you can also pick songs that have long riffs and other more difficult challenges to give you a more triumphant victory once you fully complete the game.

While not technically an anime game, many anime fans flock over this free-to-play game to roleplay as virtually anything they want.

Want to roleplay as Sonic the Hedgehog, your favorite anime girl, or some titan on Attack on Titan? There are custom avatars for many anime characters that you can play around with in one of the most popular anime games.

The fun in this game comes from socially interacting in the various worlds found in the game. You get to interact with people around the world, dressed up as characters of their own desires.

You can even use emotes, hand gestures, and benefit from the full range of motion in this game.

Check out our review of the best VR headsets for VRChat here.

One world’s last guardian, Uzume Tennouboshi, wages a war against a mysterious evil called the Dark CPU, which spiraled into a full-fledged war. Her cries for help reached the world of Planeptune, where the guardian Neptune heeded the call and joined the fight.

This anime JRPG has a highly tactical combat system, a one-on-one mode to interact with the game’s characters and visually captivating worlds. All of which are captured in smooth and new-engine graphics in a virtual reality system.

If you’re a fan of female anime protagonists, witty dialogue, and strategic turn-based combat, Megadimension Neptunia VIIR is a game that may be right up your alley.

Beat Sabers also has a level editor and custom songs, unlike other similar VR titles.

Aside from Beat Saber, other popular and notable options include Ragnarok, where you play as a Viking and pound drums to the beat of Celtic rock and Viking power metal; to Airtone, which is similar to Beat Sabers and comes with over 25 different genres of music.