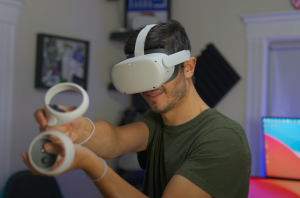 These untethered and standalone VR headsets (also called all in one VR) represent a tiny slice of the market compared to their wired counterparts—but don’t let their lack of numbers fool you.

Their ability to harness power from internal CPUs, batteries, and GPUs brings us closer to a more liberated gaming experience. Especially with big names like HTC, Facebook, and even China all continuously pouring their resources on these devices.

Is that always the case?

Not really. But it’s something to keep in mind.

If you don’t have a powerful enough PC that can run a tethered VR headset, an all-in-one VR headset makes for a solid alternative. And increasingly, it’s the preferred choice (thanks Oculus Quest 2).

Let’s look at some of the best standalone VR headsets you can find in the virtual reality market today.

The newest entrant to the lineup of standalone VR systems, the HTC Vive Focus 3 is a game changer. It features fantastic specs—an eye-popping 5K screen display, a wide 120-degree field of view with a lens view (10-degree increase from original VR), and a swappable battery.

The HTC Vive Focus 3 is intentionally designed to suit businesses and professionals, and at $1,300 for the device, you best expect this VR system to perform at an elite level.

Unlike the two VR headsets below, the Vive Focus 3 doesn’t have games (although that can change). What it does come with are constant tech support (or Customer Care, as they call it) as well as access to an entire suite of business services.

Just imagine, going to online video meetings with this system will soon be a reality. And you won’t be pestered by social-media-based log-in like other VR units from other brands anymore, either. (cough Oculus Quest 2 cough)

For a primer of the specs: its display shows an immediate upgrade from its predecessor, at 2448 × 2448 panel per eye (for comparison, the original’s display is a solid 1440 x 1600 pixels per eye). It also comes at a respectable 90 Hz refresh rate, which is also a sizable jump from the 75 Hz refresh rate of the original HTC Vive Focus. A 57-72 mm IPD tops this VR headset’s impressive specs off, which is a pretty wide range compared to other VR headsets like the Quest 2.

Compared to other top-tier virtual reality systems like the HP Reverb G2, the Focus 3 sports a better resolution, which is a massive feat. The audio of the HTC Vive Focus 3 has undergone design changes as well, which now features an “audio privacy” setting that minimizes audio leaks that were all too common in many older VR units.

The Vive Focus 3 also comes with some neat and easy-to-use controllers. It has a main Touch-style analog stick and a couple of buttons manufactured in each controller. The headset itself has a sleek and comfortable look that any enthusiast would enjoy.

Would we call this the best all in one VR headset in the market in terms of value? For its business features like remote collaboration and prototype testing, it definitely lives up to its name. But for strictly gaming purposes, you may be better off looking elsewhere.

The HTC Vive Focus 3 is due for release on June 27th, 2021. Hand tracking is due to release soon as well in the form of an update.

Looking for the best value VR headset? Look no further — the Quest 2 delivers just that.

An upgrade in performance from its predecessor, the Quest 2 is a standalone VR headset that alienates itself due to a ridiculously affordable price. Wireless, compact, portable and lightweight, this standalone VR headset stands as a formidable contender for the best all in one VR Headset for beginners when paired up against pricier VR headsets like the Vive Cosmos.

If you want to go for a wired VR headset, you don’t have to go to the store and buy a new standalone VR headset either. The Quest 2 comes with many useful accessories, including an accessory cable that, albeit expensive, can make your VR headset feel more complete and brimming with features.

These accessories even allow you to hook your standalone VR system up on the PC and play PC-exclusive games straight off the system. However, if you have a high-performing PC already and are planning to game exclusively through the PC, you may find the Oculus Rift S a more powerful option.

The Quest 2 was released with 75 Hz initially, which was prone to causing nauseating visuals due to choppy screen tearing. But a recent update gave these virtual reality headsets an all-new, native (or enhanced, with the Oculus Link) 90 Hz refresh rate, bringing the smoothness of the gameplay on par with other great systems.

The Quest 2’s specs feature a decent 1832 x 1920 display resolution per eye, an outdated and outperformed 90-degree FOV, and limited customizability with its IPD specs. You won’t be getting top-gear performance, but for its price, you’ll get a playable standalone VR headset that can formally introduce you to the world of Ready Player One.

What makes the Quest 2 so affordable?

Perhaps news to no one—but Quest 2 is a subsidiary of the technology behemoth Facebook. With Facebook requiring you to log in to play the Oculus 2, many find the risk of privacy invasion concerning, especially with the flak of Facebook collecting and storing data for who-knows-what reason. (most likely for advertisers)

It also cheaps out on battery life (a fate that not many standalone VR headsets can overcome … yet), capped at just around two to three hours. However, you can extend the battery life with the $129 accessory Quest 2 Elite Strap.

Although not as popular as the previous brands, the Beijing-based Pico Neo VR headsets are becoming the sole competitors to the Quest 2 standalone VR.

Many VR gaming enthusiasts would consider the Pico G line to work best for training, simulations, and onboarding processes; and the Pico Neo line to work for VR Gaming with the presence of room-ready 6DoF tracking (and business needs in a pinch as well). So keep yourself informed before jumping the gun on one of these untethered VR headsets.

The Pico Neo 2 has a 4K (3840 x 2160) full-color RGB display, a respectable 101-degree field of view, and room-scale tracking all fitted into one ergonomic VR Headset. The Pico Neo 2 weighs like a feather when compared to other VR headsets — sitting snugly at 350 grams. (The Quest weighs 571 grams in comparison. Yikes!)

Comfort, style, and extended wear are some of the main engineering focuses of the Pico brand. With its sleek, around-the-head design, as well as built-in eye tracking, the Pico Neo 2 is one of the best standalone VR headsets with how it fits on just about any head shape.

There are some drawbacks for the system too, though. Its processing power is one generation lower than the Oculus Quest 2, using the Snapdragon XR and XR-2 processors. In addition, the Pico Neo 2 has no physical IPD adjustability unlike the Quest 2. But on the bright side, this untethered VR system sports a slightly better overall display resolution.

All things considered, the Pico Neo 2 also comes at a higher price point than the Quest 2. So consider that when picking your low to mid-range standalone headset.

One distinct new feature can be seen when you closely inspect the controllers. There’s an upwards tracking ring that looks like something similar to what the Quest 2 has, which is a promising new feature.

Aside from that, the Pico Neo 3 also is a clear jump from its predecessor. This includes a 90 Hz refresh rate, a 3664 x 1920 LCD, and a powerful Qualcomm XR2 processor. Another thing that Pico managed to get done is make the self contained VR headset much more lightweight.

To sum it up, the Pico Neo 3 collection has improved specs that fit in a more comfortable wireless VR headset, a clear upgrade from the decent Pico Neo 2. This makes it a phenomenal headset for gamers and businesses that want a powerful, future proof VR.

Standalone VR vs PC VR – Which One is Better?

So you’ve weighed your options, but you’re looking to hammer down that final decision.

Which option should you go for — the powerful capabilities PC VR headsets can run, or the convenience and mobility of the standalone VR headset?

Here are some things to keep in mind:

The CPU takes care of how smoothly your gameplay performs on your screen. For PC VRs, your experience will depend on how strong your PC’s CPU is. On the other hand, all in one VR headsets don’t need external hardware to power it up.

Research and maths, if that’s your thing: The Quest’s CPU, Snapdragon 835, has roughly the same levels of power as the AMD FX4350 in single-thread benchmarks. However, when we kick it up a notch, the Snapdragon 835 becomes significantly more powerful in the multithreaded power threshold when up against the AMD FX4350.

If those stats flew over your head, we got you. Essentially, that means that even without a powerful all in one system, you still have a perfectly competent CPU built with your standalone VR headset.

While the AMD FX4350 is average in the grand scheme of things, this will help you decide whether you should opt for a PC-powered rig or not based on your CPU strength.

No virtual reality graphics technology for a standalone VR is powerful enough to compete against a GTX 1080 6 GB, much less a GTX 960.

If you’re looking for something that can render polygons, produce better shadows, and allow post-processing, PC-powered VR headsets edge out.

When it comes to setting up the VR headset, the wireless nature of standalone VR headsets makes it easier to set up and play.

For PC-tethered headsets, you’ll have a more difficult time connecting the right cables and ports together.

Degree of Freedom (DOF) refers to the mobility of your head and body during play. 6DOF—  present in most standalone VR headsets—works so that when you’ve positioned yourself upright, the virtual reality headset registers your movement precisely. This registered feedback wouldn’t need special sensors in your room to read your location—just your movement.

3DOF works the same way but with more restricted mobility.

For most standalone VR headsets, you get the entire range with 6DOF. This allows you to play unobstructed in a well-spaced playing area.

For PC VR headsets, your mobility has more limitations since your VR headset is also wired to your computer.

Bottom line: It depends on

Ultimately, there’s no clear winner among the three VR headsets.

There are a lot of remarkable things about the standalone VR headset like freedom and mobility.

But these features may not be most relevant to the hardcore flight sim gamer. Although, it might be relevant to your friend who just wants the VR movie experience.

Whatever the case, standalone VR headsets have a host of great utilities that can satisfy the right crowd.

If the VR headsets listed above seem like good purchases, what are you waiting for? Go get ‘em!

But really, there’s no clear winner among the two VR headsets.