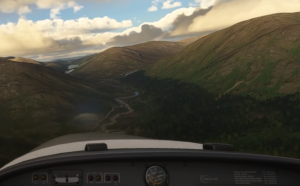 Have you heard? Flight Simulator games are increasingly popular titles for VR units.

But with over 37,000 real-world airports compressed in this one title, you’d need an equally powerful unit to tame the beast.

With lots of VR units in the market, choosing the right one for you can be a dizzying ordeal.

In this list, we’ll cover the best of all important bases: Best Overall, Best in Value, Best in Budget, and key buying tips.

Let’s take flight and explore the best headsets for a great VR experience.

Best VR Headsets For flight Sim At A Glance

Ah, the Valve Index. The luxury-line VR that dethroned many first-generation VRs out of the water.

Nothing exceeds the Valve Index in terms of performance. It sports high resolution displays and a lightning-quick refresh rate, at 1440×1600 per-eye resolution and up to 144 Hz respectively.

The Valve Index also offers a range of new and greatly improved specs. Compared to the VR headsets like the Oculus Quest 2 or the HTC Vive, the visual output in the Valve Index is clearer and more detailed, to the point where you’re able to pick apart specks of three-storey buildings from high in the skies. In the aforementioned VRs, the same scene would appear noticeably more granular and blurry in comparison.

This striking improvement in gameplay is due to Valve’s key improvements to its VR headset. This includes a more agile pixel response time, increased visual clarity, lower persistence, and invisible tracing. All of these factors result in a smoother and visually masterful flight sim experience.

Aside from that, the Valve Index also has fantastic audio quality — with 3D surround sound that delivers great aural isolation to create an immersive auditory experience.

With the flashy and powerful ballpark that the Valve Index boasts, does its features justify its hefty price tag?

Well… for the most part. The Index’s resolution and gameplay performance are top-notch, but there are a few things other VRs do slightly better. Another VR headset company edges out the Valve Index in terms of its FOV spread — it’s the Pimax series.

Among these two virtual reality headsets, when comparing the field of view, the Pimax covers around 50° more than the Valve Index. That’s huge. When it comes to flight simulator games like Microsoft Flight Simulator, this can spell all the difference in finding distinct building locations that’ll lead you to your next course.

Aside from FOV, the head strap itself is also bulkier than all other VR brands sans the HTC Vive Pro series. Since that’s the case, folks with smaller heads might find the headset quite uncomfortable to play, especially if they’ve made the jump from the lighter Reverb or the Oculus.

The HP Reverb G2 is simple to comprehend.

Knock the price of the Valve Index by nearly half and amp the display resolution to an even finer clarity. You’ll get the HP Reverb G2 — one of the more recently released VR headsets from the list, and one that is the best bang for your buck.

The 2020 Reverb G2 is another top-line VR headset that makes playing flight sims like Microsoft Flight Simulator feel fantastic. Once I entered the game, the immersive, photorealistic rendition of Earth felt like I was truly controlling the cockpit. The control panels, the skyline, everything felt unimaginably real.

Mind you, the Valve Index had a stunning display on its own, capable of delivering stellar gameplay and was worthy of praise itself.

When I put the HP Reverb G2 head strap on, it felt like a world of difference. The 2160 x 2160 display type made flying across the skylines felt incredibly lifelike.

The reason for this is because this VR headset sports brand new, industry-leading Valve lenses that come across as clear upgrades from the last generation’s console catalog. The audio coming from the surround speakers is positioned at the right angle too, sitting comfortably at 10 mm across your ears.

Though, some minor issues slightly worsened my flight sim experience. I’ll cover them since it may affect yours as well.

The HP Reverb G2’s IPD has a marginally smaller range compared to the Valve Index. So if your eye-distance sweet spot falls at these range’s ends, you’re out of luck.

The G2’s field of view, at 114° Hz; and the refresh rate, at 90 Hz, also has limited functionality compared to the Valve Index. This makes the gaming experience slightly less smooth compared to the Index, but at the cost, the difference was pretty negligible for me.

Are you still starting out, looking to embark on the flight sim world of virtual reality?

If yes, you’ll probably enjoy the most beginner-friendly and budget-friendly VR system in the market: the Oculus Quest 2.

This virtual reality headset is a standalone system, which means it requires no PC setup whatsoever. Just plug it, download the Oculus mobile app, and play. And to top it off, it’s also incredibly lightweight and doesn’t strain the neck at all.

If you want to connect the Oculus Quest 2 to the PC, here’s how: you need Oculus Link and a compatible PC to do this.

Then you’re done and can enjoy the games you’ll see on the screen.

The greatest part of this device is that it adjusts to your environment. Whether you want to sit down comfortably while piloting the steering wheel or play standing up, this VR grants you the freedom to choose to your liking. And with four Oculus-powered, ultra-wide, angle sensors powered inside the headset, your movements are tracked with tiptop precision, resulting in a seamless gaming experience.

Now, onto the specs. The Oculus Quest 2 has only one display unlike the rest of the VRs in the list, marked at a decently high resolution of 1832 x 1920. Its refresh rate is also pretty reasonable at 72–90 Hz. It suffers a little bit with a smaller — but still respectable — field of view, at 110°.

Since the Oculus Quest 2 isn’t wired by a computer, it comes at a short battery life of two hours. While that’s plenty reasonable for a moderate session, longer gaming times with Flight Simulator might not be made available. This is unlike the others on the list, which are all PC-powered and last as long as the device they’re tethered to stays active.

For the price that it goes for, the Oculus Quest 2 is a respectable option for people looking to test the waters (or, in this case, the skies).

If you’re on a budget, this VR is a great jumping pad for even better virtual reality devices.

But if you’re looking to stick with the Oculus Quest 2, then hey, that’s completely reasonable too.

At a three-digit price tag, the Pimax 8K sports a fantastic repertoire of specs: two dual 4k high-resolution displays and an ultrawide 200-degree field of view. It’s also lightweight and has a customizable IPD with spread-out ranges, maximizing the ability to find your sweet spot.

Why is this great VR for flight sims just an honorable mention?

Unlike the Oculus Quest 2, setting up and changing the settings of the Pimax 8K was incredibly taxing and full of fuss. Switching between the adjustable metrics in the settings requires you to go through clunky interfaces and unresponsive calibration software. When it came to Flight Simulator, these distracted me from fully immersing myself in the game.

This was very disappointing since I really wanted to step into the world of 200° FOV hitch-free, but yeah… that wasn’t the case.

Also, the buildings in the distance were quite hazy. The color reproduction seemed a bit off as well, which was very disappointing considering the remarkable features this virtual reality system sports on paper.

Moreover, the virtual reality system also does not include built-in headphones. I don’t know about you, but doesn’t that seem like a complete oversight for a device that’s over 1 grand? While it may come across as a cost-cutting move, it still seems hard to wrap my head around why they choose to forgo it.

Maybe the device can work for others, that’s why I deem it still worthy of a mention.

But personally, the other three were better experiences for me.

What is the best VR headset for Microsoft Flight Simulator?

The acclaimed game needs an accompanying virtual reality system to call its partner-in-crime.

Want to know the best pair?

The HP Reverb G2 is hands down, the best virtual reality for Microsoft Flight Simulator in terms of value.

Why? Here are a few reasons:

At the expense of a few frames and fewer pixels compared to more luxury offerings, you enjoy the same flight experience at a much more affordable price.

I would totally recommend the HP Reverb G2, but always keep your specific situation in mind.

If the budget-friendly Oculus Quest 2 speaks more to you, buy that instead. VR is constantly evolving, so it’s not a terrible idea to hold off for now and wait for better releases to come your way.

Once you hit the requirements, now it’s time to test whether Microsoft Flight Simulator itself can run.

Remember, these are the minimum requirements. They’re just enough to run the game, but if you’re looking for optimal performance, consider high performance CPU and graphic card units.

If you want the smoothest experience possible, especially for VR, consider upgrading your rig with top-of-the-line equipment.

Are you going to only play (flight) sims or other games too?

If you’re fully dedicating your virtual reality system to experience other games, ensure that your PC has enough power to run those games.

The specs for Microsoft Flight Simulator may be less intensive than other games, so do your research.

Other flight games, like X Plane 11 for instance, demand higher specs. With at least 16 to 24 GB of RAM, an i5 6600K processor, and a GTX 1070 Nvidia card, your VR headset can most likely display X Plane 11 with high quality.

Here are rule of thumbs before dipping your toes in virtual reality headsets:

Wear glasses? Prioritize the adjustability of the IPD. Alternatively, opt for a headset with ample glasses space.

For a game that’s all about putting you in the pilot’s seat, nothing feels better than flying past marvellous cityscapes at photorealistic quality.

And among the list, the HP Reverb G2 allows you to view sea level at pristine clarity — with a rendition of the world that’s unlike any other VR I’ve tried.

VR gaming sets itself apart by setting you up for these unmatched levels of immersion. Transporting you straight to the heart of the cockpit as if you were really there.

For that reason alone, the image clarity offered by VR systems is very important to me…

…and the HP Reverb G2 delivers just that.

With no major flaws dragging it down, I’ve got little else to say except for more praises.

I highly recommend this VR unit.

See you in the skies!