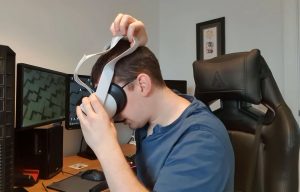 Playing VR for people with glasses is a wildly different experience than playing them without one.

For starters, wearing a headset with glasses feels weirdly alien. You’ll have to put on the headset face first — like putting on swimming goggles — to avoid smashing your face against the VR headset.

I wore a headset a bit too tight, and all it left me was an agonizing headache.

To prevent you from making the same mistake, I’ve compiled a list of the best VR headset for glasses wearers. One that doesn’t come with all the hassle of setting it up.

Let’s look into the best VR headset for people with glasses.

Top VR Headsets For Glasses At A Glance

The HTC Vive Pro 2 is one of the best VR headsets for people with glasses. It boasts a phenomenal 2448 x 2448 display per eye on an LCD screen, capable of delivering mouthwateringly good visuals in even the most demanding triple AAA titles.

But, as we glasses wearers can attest, stunning 4K graphics mean nothing if we can’t use our glasses to see them.

For glasses wearers, though, you can rest easy. VIVE says that most prescription glasses, even large ones, can fit in the HTC Vive Pro 2. I’ve tried it myself with glasses on and it was a comfy, spacious fit — yet secure enough that agile real-life movements didn’t shake the glasses off. Though I did have to go through a few IPD adjustments to get the adjustment just right.

The HTC Vive Pro 2 is a high-end console hovering above the $800-1000 range. It’s by no means a budget build, but its specs are a generation up compared to its predecessors. For comparison, it’s almost comparable with the Vive Index in specs but rounds out to about a few hundred dollars cheaper.

Not a bad deal at all.

Its refresh rate is 120 Hz — able to provide a solid, smooth performance. It comes with full SteamVR compatibility allowing you to play the latest titles as soon as it’s launched on Steam. The IPD is adjustable from anywhere between 57mm to 72mm — a great range for glasses wearers.
Overall, the HTC Vive Pro 2 is fantastic for people who want a VR headset with prescription glasses. If they could improve one thing, maybe the muffled audio and a decreased reliance for an ultra-powerful PC rig. But that’s seriously about it!

The PSVR is a high-end, plug-and-play virtual reality system that’s only compatible with the PlayStation console. Although the topic of console versus PC is up for debate, there’s no denying owners that the PS VR headset is a phenomenal system for glasses wearers.

The headset is secure and fits comfortably for most face builds. The weight is well-distributed and fits your face and glasses snugly. The interior is spacious and adjustable — capable of housing thick-set glasses frames. It’s a cozy fit, has full 360-degree vision, and a nicely-positioned precision tracking that can track eye and body movement with pinpoint accuracy.

The VR headset experience is nothing short of amazing either. Although it can’t play Steam-exclusive powerhouses, it gives console players a delightful alternative if they can’t let go of their Sony console.

The VR comes with a 5.7 inch OLED display and a wide 100 field-of-view vision. More than enough for most popular VR games like Microsoft Flight Simulator and Beat Sabers, but certainly not the best. The refresh rate falls between the ranges of 90 Hz to 120 Hz, an overall respectable range.

The display is the standard mid-range resolution of most VR headsets — 1920 by 1080 pixels. That’s enough to enjoy your time immersing into a game for a few hours, like chatting in VR Chat or clicking heads in a first-person shooter game.

Setting up the VR headset is not as tedious as it would be with a high-end VR system like the HP Reverb G2. What draws most people to buy this console over the rest is its accessibility if you already have a PS4.

If you don’t have a powerful graphics card or a top-of-the-line processor, you’re out of luck when it comes to running games on high-end consoles. This is a recurring problem due to the high barrier to entry. But this is no problem for the PSVR. That’s why even five years after its release, the PSVR is still a top-charting VR console in the virtual reality industry.

All that said, this VR system’s affordability ($400 to $600) makes it all the more enticing for entry-level virtual reality fans with glasses to enjoy. Add to that the sheer comfort you get to experience with this VR unit — and you won’t ever worry about the comfort and fit of your Sony VR headset. It’s pretty damn good.

Cons of this VR headset with glasses:

Another contender for a great VR gaming headset to strap on for glasses is the HP Reverb G2. It features an LCD screen at 2160 x 2160 resolution per eye, rendering quality images on your screen. Its refresh rate isn’t top-notch by any means, but it’s workable at a 90 Hz refresh rate. This headset also has a pretty wide FOV, coming up to 114-degrees.

For glasses wearers, the HP Reverb G2 might be a bit tight if your glasses are a tad bigger than 13.5 cm x 4cm. Otherwise, if it’s narrower, you shouldn’t have any problems with your gaming experience whatsoever. The Reverb G2 is lightweight, comfortable, and convenient to use, so to those who don’t wear lenses or glasses, you’ll have a great time as well.

The IPD of the HP Reverb G2 is capable of adjusting from anywhere between 60mm to 68mm. Pretty alright for its price point slated at $600, but nowhere close to beating the IPD customizability of the HTC Vive 2.

But if having an immersive auditory experience is something that you desire the most — then the HP Reverb G2 is by far one of the best VR headsets for the job. Overall, it’s a cheaper alternative to the Vive 2 with much better audio, but I’d personally recommend dishing out a few hundred bucks for the Vive if comfort is your priority.

No “Best VR headsets” list is ever complete without paying homage to one of the very first top-line virtual reality headsets — the Valve Index. And despite the system’s difficulty in setting up and the need for a powerful rig, the Valve Index is a majestic beast of a console for glasses wearers.

The most unique aspect of the Valve Index is its special “eye relief” feature. This allows you to bring the Index lens as close to you as possible. All while maintaining and even increasing the FOV to 130 degrees!

For glasses wearers, Valve Index’s thoughtful design manages to make having glasses an advantage. Which is a terrific feat in itself.

The specs are outstanding too. You get a 1440 x 1600 display resolution for each eye (2880 x 1660 combined!), a refresh rate of up to 144 Hz, and external sensors called SteamVR Tracking 2.0. This virtual reality machine is designed for comfort and performance — and its luxury price reflects that.

While there may be more next-gen VR headsets coming out in the following years, the Valve Index continues to make its mark as a formidable force in the virtual reality market. If you’re willing to shell out big bucks for a banging headset, the Valve Index is waiting patiently for your open arms.

The Oculus Quest 2 is another virtual reality headset that performs marvelously with glasses. It comes with a ring overlay that safely protects your glasses, easing you into a comfortable gaming experience.

However, for glasses with sizes 142mm wide and 50mm high, you may have trouble fitting your glasses into the Oculus Quest 2. Though this is similar for most other VR headsets in the market as well.

The Oculus Quest 2 stands out among the VR headsets listed here as the most affordable system. It’s also very beginner-friendly, being both easy to set up and wireless to boot.

For the specs, it’s pretty average. It comes in hot at 1832 x 1920 display resolution per eye, a smooth 90 Hz refresh rate, and around a 100-degree field of view. It also comes at preset IPD options instead of an adjustable range—sticking at 58 mm, 63 mm, and 68mm.

Overall, the Quest 2 is a great budget option and is great for glasses wearers that don’t wear giant frames.

How comfortable is VR with glasses overall?

VR with glasses is comfortable in most cases. VR headsets come with snug straps that fit around your head. However, some of the older VR headsets with these straps won’t be as comfortable. Newer versions can take on most glasses easily though.

For absolute certainty, you should consider measuring the height and length of your glasses then pair them against the VR headset. This is so that you won’t encounter any costly surprises after you purchased your virtual reality system.

As a tip to making glasses fit more comfortably, ensure your straps are in the loosest setting. Then, tighten it gently on your head. Don’t apply pressure by making it too tight to the point that it’s digging against your face. This can cause massive headaches later on.

If you can’t find yourself getting used to wearing glasses when playing VR, there are other accessories to improve comfort. Prescription lens inserts, for instance, can be fitted inside your headset in place of your glasses to get rid of the need for bulky frames.

These lenses work exactly like glasses. The only difference is it does away with the frame or arms as it’s clipped on the headset itself.

Do you need glasses with VR?

No, you don’t need glasses with VR. The spatial distance you see in VR is about two meters away from you in reality. If you struggle seeing things two meters away without glasses, you’ll need a vision aid of some sort to have a good VR experience.

VR for gaming doesn’t improve eyesight. On some rare occasions (1 in 4,000 people), playing VR for hours on end can even worsen it.

According to doctors, the reason VR can accelerate problems is that we process visual stimuli in a different way to normal.

However, there are many developments by scientists to mitigate this issue. One of these new developments includes the SightPlus, which aims to restore vision by projecting a real-world video to the working part of the retina.

If you have VR contacts, always choose to go for them whenever possible. If your prescription falls under -3.00, you’ll need a contact lens or lens inserter to provide you visual clarity in-game.

What are good VR games with glasses?

Many virtual reality headsets can play great titles — regardless of whether you wear glasses or not!

One crowd favorite includes Beat Saber, where you slash through beats flying past you at the rhythm of electronic music.

Another one is VRChat, where you enter an online room and roleplay and chat with internet strangers.