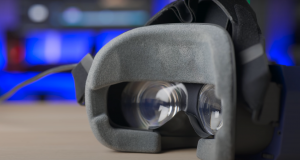 It’s no secret: in recent years, virtual reality is starting to grab much larger pieces of the gaming pie. And it’s only growing.

With so many high-end VR headsets across the market, you may be inclined to think that cheaper VR systems would equal worse gameplay, right?

Tech innovations have allowed VR companies to cut-cost without skimping on quality. Know what that means?

The release of many fantastic VR headsets at much more affordable rates left and right. From better tracking, resolution displays, and controls to a more snug headset fit, the VR experience is increasing its stakes each year.

Let’s take a look at some of the best VR headsets you can get for under $300.

Best VR Headsets Under 300 At A Glance

Are you searching for the best beginner headset? The Oculus Quest 2 is a great all-in-one standalone virtual reality headset for people looking to dip their toes into an affordable VR experience. It has everything you need to get started — motion controls, built-in headphones, microphone, and headset are included in the box, all at an excellent price entry point. On top of that, it’s easy to set up and doesn’t come with excessive wiring unlike other base station VR gaming headsets.

The unit is a clear upgrade from its predecessor, the original Oculus Quest 1. It sports sharper full-type LCD displays at 1920 x 1832 per eye (unlike the original Oculus Quest 1, with an OLED display), as well as improved processing power with the Qualcomm Snapdragon 865. It also has a refresh rate of 90 Hz, 10 Hz more than the Oculus Rift S, which makes gameplay look and feel much smoother.

Another cool thing about this VR is that you don’t need a gaming PC to run it. While that may seem like you’ll be missing out on cool PC-exclusive games, you can use a USB-C support cable or install Virtual Desktop on the VR system to fix that issue. However, you might encounter a few latency issues if you go for the latter option. Plus, the refresh rate is comparatively worse compared to a non-PC game experience.

Just like any other VR console, the Oculus Quest 2 isn’t all sunshine and rainbows.

Since it’s untethered, it runs on battery power. This leaves this contender for the best VR headsets a 2 to 3 hours of battery life before it’ll need another recharge. The interpapillary distance (IPD) also doesn’t leave many options for you to choose from, limited to just 58 mm, 62 mm, and 68 mm ranges. So if your personal scope doesn’t fall within those ranges, expect a slight blurring when you play fast-paced games like first-person shooters.

Already own a powerful gaming PC? The Oculus Rift S is one of the best VR headsets to round off your rig. The system is a leap forward from the original Oculus Rift, but there are still some questionable trade-offs that stop most enthusiasts from calling it a true next-gen console.

But let’s look at the pros first. The Oculus Rift S remains tethered to a base station (your PC) with a wire that can be as long as room length. It powers itself through your PC’s processing unit while sporting an impressive 1,280-by-1,440 resolution per eye resolution, which isn’t half bad. Since the system uses your PC’s processor and graphics card, the Oculus Rift S has a much more detailed and dynamic visual experience compared to the Oculus Quest 2.

Despite being a tethered device, setting up the Oculus Rift S isn’t all too difficult either, at least compared to high-end devices (cough Pimax 8k cough). Though head-to-head, Oculus Quest 2 was still easier to set up. The sensor combination of the Rift S translates your real-world movements to in-game movements seamlessly.

On top of that, the IPD range for this device ranges between 58 to 72 mm, which provides you more customizability compared to the Oculus Quest 2 in terms of your own unique viewing scope. A must if you wear glasses.

For a $299 unit, you’ll achieve an impressive graphical output that rivals even high-end systems. However, it suffers from a lower refresh rate at 80 Hz, lower than the Oculus Quest 2. This stutters gameplay by a noticeable margin. The device’s audio also leaks out with a weak bass that reduces the zest of many fast-paced gameplay moments. The backward compatibility of the Rift S’s library with last-gen games is something that we do adore, though.

A Windows Mixed Reality VR experience can be an affordable alternative to high-end VRs like the Vive and Rift. It’s cheaper, has Steam integration, is easy to set up, and can be played in a whole-room setup. What’s not to love?

The one we’ll review for this guide is the HP Mixed Reality Headset, which has some interesting features that set it apart from the rest.

The good: The headset of the HP WMR system has a soft and moisture-proof cushion that makes for a pleasant, evenly distributed fit. Its display resolution produces 1440 x 1440 panels, similar to Lenovo, Asus, and Acer’s headsets. It also does a pretty good job producing crisp and clear audio.

Another unique and great feature of this VR gaming headset is by far the removable tether cable. The problem for most tethered devices lies in the probability of unintentionally trampling it when in use, but the cable for this HP is 11 inches long and has a socket that connects to an extension cable that can resist applied pressure more easily.
The bad: The HP Mixed Reality Set uses LCDs instead of OLED, which makes deep blacks harder to replicate. The 100-degree FOV isn’t spectacular either, and it feels a lot more cramped compared to the other VR headsets we’ve tried. IPD adjustment isn’t easy with the HP system either, fixed at about a 60 mm IPD. While the fit was snug, the flip visor felt like it was lacking in quality and could break at any moment. But that’s something most Mixed Reality Headsets would share.

Do you have pre-existing hardware?

Being a beginner shouldn’t excuse you from researching the fundamentals.

If you’re searching for a budget VR games system, especially a tethered one like the Oculus Rift S, know the minimum system requirements of the VR system and the games you’re eyeing to play beforehand.

If you don’t meet the PC VR requirements, your options become noticeably thinner. Fortunately, gaming systems like the Quest 2 are standalone and have an extensive library for you to play just fine.

If you have a PS4 instead of a computer gaming rig, you can opt for the PSVR. If you only have mobile devices, there are some VR systems for that too to suit your needs.

How much of a gamer are you?

This is a valid point for you to consider! Chances are, gamers already have an extensive library of games in their Steam accounts that have VR compatibility. In that case, get yourself a VR system that allows you to play those games on the system.

If you don’t consider yourself a gamer, you can look for systems that have a lower barrier to entry, like the Quest 2. The Oculus Go is another solid (but outdated) option.

Do you want to do more than just game in VR?

With VR on the rise, there’ll be more opportunities for the industry to tap into other entertainment mediums besides gaming. These could include checking new apps, watching movies, and visiting websites from your VR system.

If you want to remain future-proof you’ll need VR systems that will allow you to access these mediums. PSVR will not have a lot of room to explore non-gaming content that much. Oculus Go won’t have access to the internet either. Windows Mixed Reality VR, however, does provide web access.

Facebook acquired Oculus VR in 2014. Worrying about Facebook tampering with your private data and other privacy issues is a valid concern, albeit a minor one. If that’s the case, you may prefer to look into the WMR headsets instead. Alternatively, you can look for non-Oculus VR headsets out there which means you’ll have to increase your budget.